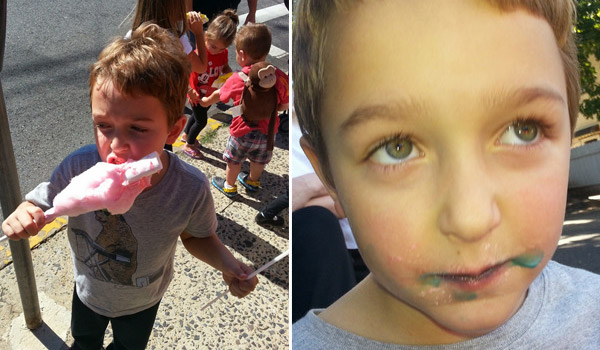 After devouring David Foster Wallace’s A Supposedly Fun Thing I’ll Never Do Again (highly recommended!), which opens with an essay about the author’s visit to the Illinois State Fair, I never thought I could enjoy the decadence of a street fair the same way, but once again, I was wrong.

Today we had the pleasure of stumbling upon not just one, but two street fairs. Down the street on Union Ave, Leo and I noticed the “street closed” signs and decided to check it out. What a phenomenal party! Later on in the evening, on our way to Lyndhurst town park, once again we hit “street closed” signs only to land on another fair.

According to a fireman I spoke to while Leo was exploring their firetruck, the goal of the fair was to bring more attention to upper end of Union ave, a school area with a few blocks of commerce that doesnt get nearly as much attention as the area around Park ave (next to the Rutherford train station). Whether that was the real goal I dont know, but the town did a really nice job of drawing the public, specially kids. In addition to the usual street fair food and booths, they brought:

The kids’ attractions may not seem like much, but they were ALL 100% FREE! They were managed by Cliffhanger Productions, and I’m not sure if they donated the equipment and staff or if the town paid for it, but Cliffhanger did an excellent job. Their staff kept all of the kids in order, managed to keep lines always moving, and were always courteous with the kids. Leo went multiple times on all of the rides and bounce houses.

As if offering free rides for the kids wasnt enough, Rutherford seemed to have struck gold with a few other vendors at the fair. Meadowlands YMCA had 3 or 4 booths, with games, balloons, and even cotton candy being offered free (Cotton candy asked for a $1 donation), and volunteers at the booths seemed to be enjoying their time as much as fairgoers. Another ultra-popular booth came from (I hope) a pet store, and consisted of several different lizard aquariums. In an ingenious move, they kept a friendly lizard out of its eco-cage and allowed the kids to hold it in their hands – instant win. When we walked in around 1pm, they had about 15 aquariums on display, all gone by 4pm. And to top it all off, the Rutherford fire department brought their rescue truck out, opened all of its compartments, and allowed the kids to explore its insides. Another huge win.

Additionally, food was modestly priced and easily available (almost no lines!), and the weather held up well. With all of that going on, this was the first time we spent more than 1-2 hours at a fair. Leo’s battery didnt go out until way past 5pm, which was right around the time they were deflating the bounce houses.

To offer a drastic comparison, Lyndhurst could barely hold us for 30 minutes. The fair, which was a fundraiser for Hackensack University Hospital (according to the person on the microphone, hammering the message a few times/minute), had the entire park area roped off and expected folks to pay for access. I believe it was mostly a suggestion, since they didnt seem to be kicking anybody that simply passed under/over the ropes, but an aggressive technique nonetheless.

The worst part, however, was seeing the playground shut down at 7pm (when we got there). The Lyndhurst playgoung is open 7 days a week until 8pm, so I’m not sure if they simply closed an hour earlier or if they closed it entirely for the fundraiser. Roping the park is kinda bad, but shutting the park seems really unfair to the kids.

Considering they also had 3 bounce houses and a not-very-safe-looking spinning carnival ride, we were willing to consider it a trade-off. However, unlike Rutherford, each bounce house required its own $3 admission ticket. Plus, there was only one kid-driven booth (face paint), and another selling generic barely-made-in-china toys, neither free (the toy booth asked $10 for a toy available on dollar tree). Other booths had an eerie feeling of garage sales, with one selling nothing but bundles of socks. Overall, it seemed the entire fair was geared towards adults, which if true, makes total sense. We did arrive there later in the day.

Highlight of the event – crystallized Jellyfishes, colored with glow-in-the-dark paint and encapsulated in resin displays. A really cool idea! The jellies are dipped into liquid nitrogen, then painted somehow before being engulfed by resin. I might pick one up for Leo’s room if I ever find the lady’s card (she doesnt have a website, of course).

In 7 years living in the US, this little Rutherford street fair was the first to ever make us comfortable and in which we actually had fun. Is it fair (no pun intended) to expect other events to offer tons of free stuff for the kids? Probably not. But it does set some high comparison standards.

One thing is true – promotion for both events could’ve been much better. Leo goes to school in Rutherford, and we go to Lyndhurst town park at least twice a week, and we had no idea either event was happening today.

Last night was definitely rough. Really strong winds made us feel like the windows were ready to burst at any point, and we could hear a lot of noise from nearby car/roof damages. The aftermath shows a ton of downed trees around the neighborhood, and several areas are out of power. Check out my Tracking Hurricane Sandy post for more details.

Our building suffered some minor damage – as you can see above, the swimming pool fence is mostly gone. The parking lot has a lot of debris, and several signs are missing. A big tree fell very close to the garage, but luckily it doesnt seem to have damaged anything.

Our offices in Hillside are out of power, and so is most of the neighborhood – Clifton, Passaic, Rutherford and Lyndhurst have non-working traffic lights, and there are barely any businesses open. At this point, I’d say the biggest danger is driving around with barely any traffic lights working.

Luckily, it seems the worst is over. We’ve eaten way too much banana cake, and are ready to step out of the house a bit.

Now it’s on to recovery and clean up.

Update – the worst seems to be over, but the damages are obvious. See pictures of Hurricane Sandy’s aftermath in Passaic.

Wind is now picking up speed, blowing mostly against one of the windows in the living room. Rain is coming down in intervals, with showers falling sideways (really cool to watch). We still have power, which is my main concern at this point. Click below for even higher resolution:

On the bright side – Wife’s banana cake just came out of the oven and it’s phenomenal!

Wind has definitely picked up speed, and rain is now non-stop. We still have power (very happy about it). Click below for higher resolution:

Wife’s banana cake is indeed amazing. I fear being locked inside with such entity will create negative effects to my waistline.

Wind is really strong, and rain is falling heavily. Scratch that – now we have a proper storm. Lightning and all, gorgeous, but dangerous. Pretty loud noises in all of the windows, and debris are flying. Check it out (click for higher-res):

Since it’s dark, there’s no point in me taking pictures, but I did go out and took some video from the ground level. Scary to think that those parking signs could end up flying away, they’re very sharp and can seriously hurt someone:

On a more negative note, lights are starting to flicker. We have our candles and flashlights ready, but we’re really hoping we dont lose power. Fingers crossed.

We have not lost power, which we’re extremely thankful for. Winds are still very strong, but rain seems to be mild, pretty much gone. Click for bigger image:

The noise of chainsaws and wood chipper trucks is constant, the damage around the neighborhood was severe. I will post some pictures on another article.

As Hurricane Sandy makes her way into the East Coast, we’re tucked in, trying to make the most of this time indoors. One of the projects that came to mind was tracking the storm, so we could keep friends/family updated and hopefully make the time go by a bit faster.

From our apartment in Passaic, NJ we’re blessed with a great view, which I plan to use to track the storm. From time to time I will take a panoramic shot and update this post.

All pictures and video taken with my Samsung Galaxy SII

I’m back analyzing Northern New Jersey playgrounds, but this time I not only have good things to say but a “higher” reason to say them. Believe it or not, there are some people in my family that still pay attention to the pics of my son I furiously email them on weekends. One of those family members is my mom, who’s one of the most talented architects in Fortaleza, Brazil.

She happened to see a previous pic we took at the Lyndhurst Town Park and was intrigued at the sustainability of their Vortex water park. She ended up pitching it to a client and the client loved the idea, so she “commissioned” me to take more pics and investigate a bit further. The rest of this post, as well as the descriptions in the album below are in Portuguese, for her.

P.s – The Lyndhurst Town park is our 2nd favorite park in the entire NJ/NY area. It’s by far the cleanest and safest, and in our opinion, loses only to Hoboken. Hoboken’s pier park deserves a post of its own, soon, and it currently ranks #1 in family entertainment. 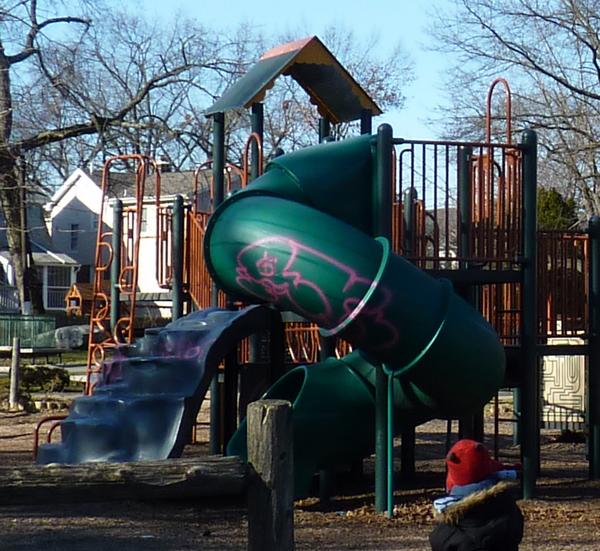 This morning Little Leo and I went to Passaic Park for a walk, and if you’ve never been there, it is a gorgeous park. We’re very lucky to live within walking distance.

With that said, however, the park is GROSSLY neglected by the town.

1. Playground Access Afterhours
We dont go to the park every day. Not even every week. But the past 2 times we were there – today and before Christmas, in December, we found evidence that the park had been used afterhours by the wrong type of kids.

In December, I saw a used condom. Seriously, a used freaking condom.

I’m a huge fan of outdoor “fun”. I have to admit it. But the park, seriously?

It’d have been great to shove that incident off as a unique occurrence. Today, however, the park had huge Graffiti marks in multiple toys. And not even the cool, artisy, Banksy style graffiti. The ugly, gang-like, poorly drawn ones. See below:

Simple solution – a tall, solid, sturdy fence around the playground. Institute decent hours. While ill-intended folks could very well jump over the fence and have sex or graffiti, it’d take a lot more effort and draw that much more attention. Plus, it’d help with problem #2, which I talk about below.

2. Duck Feces
There are a bazillion ducks around the park, and while they’re very entertaining, they go about their “needs” EVERYWHERE. Seriously, everywhere. I’m not trying to potty train these ducks, but they completely ruin not just the green areas but large parts of the pathways and even the playground field. 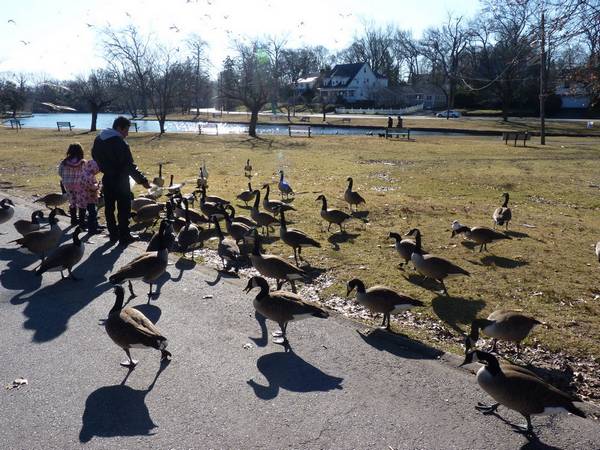 Simple solution – a short, simple fence throughout the pathways would prevent the animals from going #2 there. Additionally, better enforcement in the “DONT FEED THE ANIMALS” rule can keep people from making a family activity out of feeding these ducks.

Not In The Budget?

Allow local community associations to pitch in. Allow businesses to contribute in exchange for subtle ad placements. It’s a fantastic asset to the neighborhood and it can draw much needed real estate attention to the area.